Development Board April 19, 2019 FPGA Based Hosting

FPGA stands for “Field Programmable Gate Array“.  A field-programmable gate array (FPGA) is an integrated circuit designed to be configured by a customer or a designer after manufacturing – hence the term “field-programmable”. The FPGA configuration is generally specified using a hardware description language (HDL), similar to that used for an Application-Specific Integrated Circuit (ASIC). Circuit diagrams were previously used to specify the configuration, but this is increasingly rare due to the advent of electronic design automation tools. 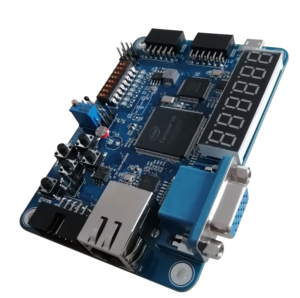 FPGA essentially is a huge array of gates which can be programmed and reconfigured any time anywhere. “Huge array of gates” is an oversimplified description of FPGA. FPGA is indeed much more complex than a simple array of gates. Some FPGAs has built-in hard blocks such as Memory controllers, high-speed communication interfaces, PCIe Endpoints, etc. But the point is, there are a lot of gates inside the FPGA which can be arbitrarily connected together to make a circuit of your choice. More or less like connecting individual logic gate ICs (again oversimplified but a good mental picture nonetheless). FPGAs are manufactured by companies like Xilinx, Altera, Microsemi, Fraser Innovations, etc… FPGAs are fundamentally similar to CPLDs but CPLDs are very small in size and capability compared to FPGAs.

FPGAs contain an array of programmable logic blocks, and a hierarchy of “reconfigurable interconnects” that allow the blocks to be “wired together”, like many logic gates that can be inter-wired in different configurations. Logic blocks can be configured to perform complex combinational functions, or merely simple logic gates like AND and XOR. In most FPGAs, logic blocks also include memory elements, which may be simple flip-flops or more complete blocks of memory. Many FPGAs can be reprogrammed to implement different logic functions, allowing flexible reconfigurable computing as performed in computer software.

FPGAs are similar in principle to, but have vastly wider potential application than, programmable read-only memory (PROM) chips. FPGAs are used by engineers in the design of specialized ICs that can later be produced hard-wired in large quantities for distribution to computer manufacturers and end users. Ultimately, FPGAs might allow computer users to tailor microprocessors to meet their own individual needs. 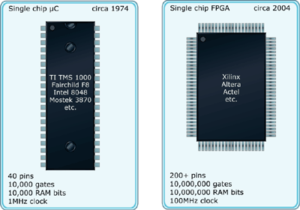 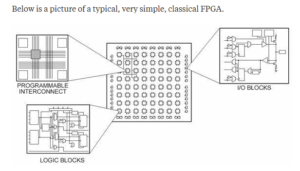